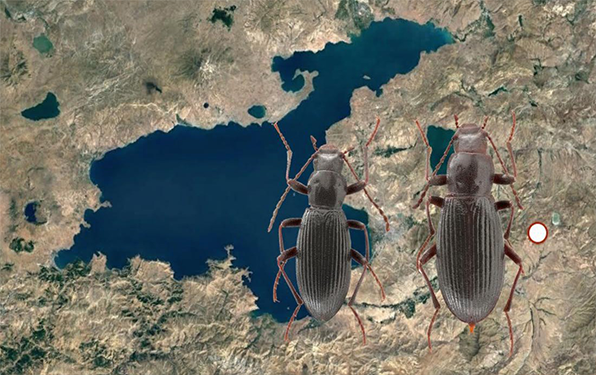 A new species of beetle which has been discovered from Erek mountain around Van Lake by scientists Assoc. Prof. Bekir Keskin and Assoc. Prof. Nurşen Alpagut Keskin from Ege University Faculty of Science and their Russian colleagues was named after Ege University in honour of the University’s 60th anniversary.

The new beetle species which is active at night and feeds on lichens on mountain areas was named “Eustenomacidius egeuniversitatis Keskin et al., 2017 (Tenebrionidae)” and published in April 2017 issue of Turkish Journal of  Zoology. This work and nomenclatural acts it contains have been registered in ZooBank Life Sciences İdentifier (LSID).

Insects have an important value to biodiversity with approximately 1.000.000 described species. Recent studies shows that insect biodiversity in Turkey may be much more than it has been estimated. The team who has been conducting studies to establish species diversity and gene sources, has described more than 30 coleopteran species.